The transmission system operator TenneT has successfully installed the DolWin kappa offshore platform off the coast of Lower Saxony. It will be the centrepiece of the DolWin6 direct current link, which will safely bring green wind power from the German North Sea to land. After just three years of construction in the Spanish port city of Cádiz, the platform was shipped to Rotterdam (Netherlands) at the beginning of August, where it was reloaded onto the service vessel the “Pioneering Spirit”. From there, the offshore converter station was transported to its final destination and installed in a 12-day campaign. The DolWin6 grid connection system is scheduled to be commissioned in 2023 and will provide renewable energy to over 1 million households.

“TenneT is the leading offshore transmission system operator in the EU. We have proven this once again with the on-schedule installation of the DolWin kappa offshore platform. DolWin6 is already the 13th offshore grid connection in our German portfolio and will bolster the security of supply in Germany and Europe,” said TenneT COO Tim Meyerjürgens upon the successful installation of the platform. All components of the offshore platform were assembled in a single installation campaign at sea. “In addition to our reliable partners, we also have our many years of experience and our unique expertise in offshore grid expansion to thank for this success,” Meyerjürgens added.

The “Pioneering Spirit” only needed 12 days to complete the installation. At 382-metres long, the world’s largest service vessel brought the offshore platform from Rotterdam to its final destination. Once there, the foundation structure (jacket), which is almost 44 metres high and weighs over 5,000 tonnes, was installed first. Then, 10 piles were driven up to 68 metres deep into the seabed and attached to the foundation structure. Lastly, the “Pioneering Spirit” placed the approximately 11,000-tonne superstructure (topside) on top of the foundation structure. The two have a combined height of about 82 metres, so the platform will rise about 53 metres above the surface of the North Sea.

Beginning in 2023, the platform will convert the alternating current generated by offshore wind farms into direct current, which will then be transmitted to Hilgenriedersiel on the mainland via an approximately 45-kilometre-long subsea cable. From there, the electricity will be transmitted to Emden by a land cable, which will also be 45 kilometres long. Here, TenneT has built the Emden/Ost converter station and transformer station to convert the direct current back into alternating current and then feed it into the high-voltage grid at the required voltage level.

Facts and figures on DolWin6 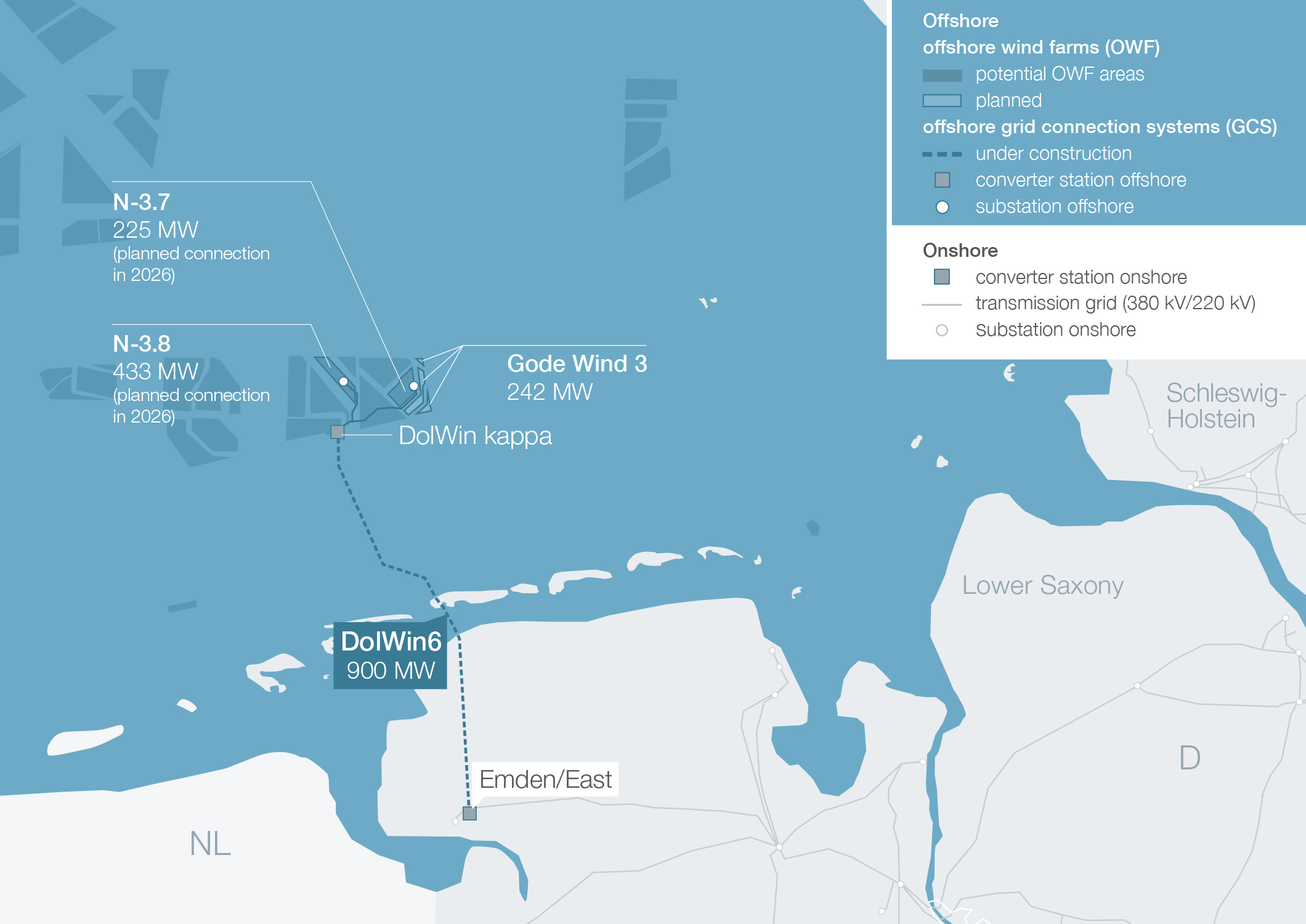