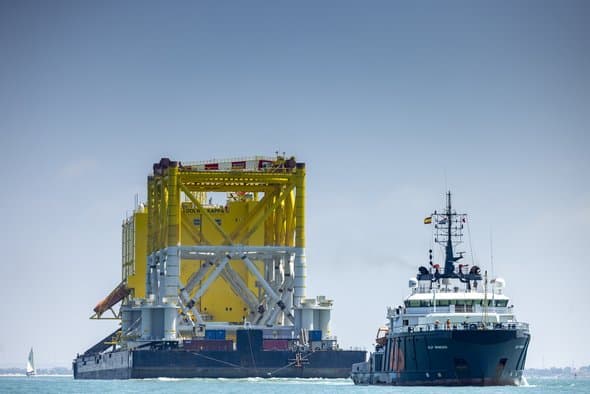 TenneT will soon be reliably bringing even more green wind power from the German North Sea to land via the direct current connection DolWin6. Europe’s leading offshore transmission system op-erator has now reached the next important milestone on its path to this objective: the sail-out of the 900 MW offshore platform DolWin kappa, which took place on 5 August 2022 from the Dragados Offshore shipyard in Cádiz, Spain. After only three years of construction, the platform is now on board the transport barge “Iron Lady” and on its way to the Dutch port of Rotterdam. There, it will be reloaded onto the world’s largest service vessel, the “Pioneering Spirit”, and then shipped to the installation site. The grid connection system is scheduled to be commissioned in 2023 and provide renewable energy to over 1 million households.

“TenneT is taking its mission seriously and advancing the grid expansion in the North Sea step by step. With the successful sail-out of the offshore platform DolWin kappa, we have taken the next important leap. DolWin6 is already the 13th offshore grid connection in our German portfolio and will bolster Europe’s urgently needed energy independence beginning in 2023,” said TenneT COO Tim Meyerjürgens when the platform set sail. “We also have our partners to thank for the fact that we are reaching this milestone on schedule. Working closely with our contractors Siemens Energy and Dragados Offshore, my colleagues took only three years to build the platform despite the enormous challenges posed by the pandemic. This is an outstanding achievement – and proof that we have strong, reliable partners,” Meyerjürgens added.

Protecting the environment and nature is our top priority

The platform consists of a foundation structure (jacket) and a superstructure (topside). The two have a combined height of about 82 metres, so the platform will rise about 53 metres above the surface of the North Sea. In addition, there will be a bridge that will connect DolWin kappa with DolWin beta (grid connection system DolWin2), which was already commissioned in 2016, in order to efficiently use the already existing infrastructure of the parent platform. What’s more, the overall optimised design of the platform has significantly reduced the size of DolWin kappa. “The well-thought-out construction of the offshore platform conserves important resources while minimising impacts on the environment. This clearly illustrates that protecting the environment and nature is our top priority when planning and implementing our grid connections,” Tim Meyerjürgens said.

Once it arrives in Rotterdam, the platform will be reloaded onto the world’s largest service vessel. The 382-metre-long “Pioneering Spirit” will carry all platform components (jacket, topside, piles and bridge) to their final destination in the German North Sea. Once there, DolWin kappa will be installed directly from the work boat. After the platform is commissioned in 2023, it will convert the alternating current generated by offshore wind farms into direct current, which will then be transmitted to Hilgenriedersiel on the mainland via an approximately 45-kilometre-long subsea cable. From the landfall in Hilgenriedersiel, the electricity will be transmitted to Emden by a land cable, which will also be 45 kilometres long. Here on land, TenneT has built the Emden/Ost converter station and transformer station to convert the direct current back into alternating current and then feed it into the high-voltage grid at the correct voltage level.

Facts and figures on DolWin6 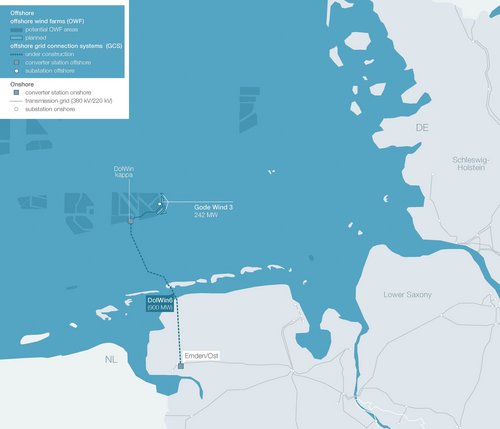