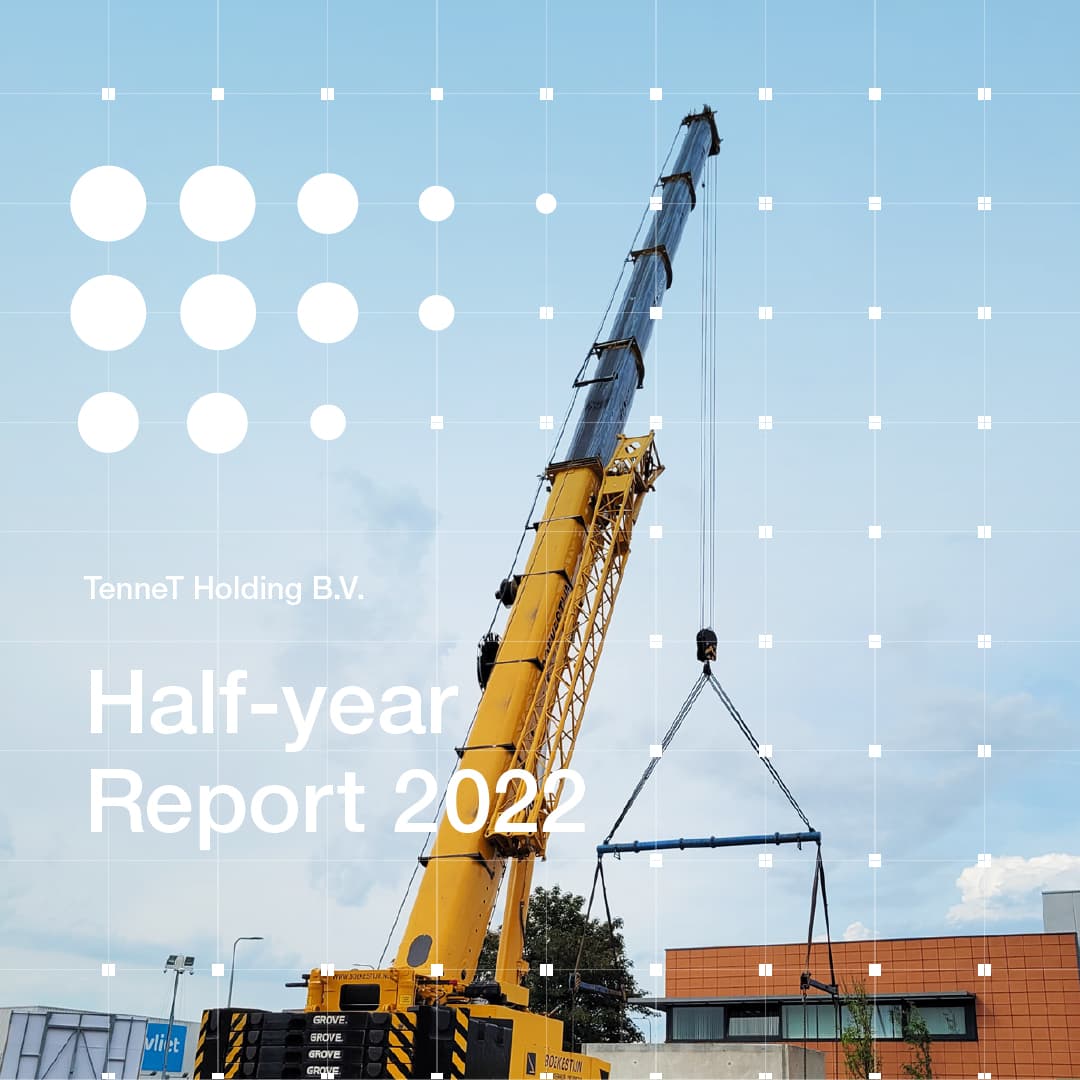 In the first half of 2022 within a complex and unpredictable external environment TenneT continued its strong efforts to drive the energy transition, investing EUR 1.6 billion in the grid and once again maintaining a high grid availability of 99.999%. Underlying revenue increased by EUR 2,407 million to EUR 4,975 million.

This was mainly due to increased compensation of grid-related expenses and the increased asset base. The underlying operating result increased by EUR 148 million to EUR 579 million. With energy security in the spotlight as never before, TenneT is focusing on both short-term and long-term solutions to deliver on its critical task: ensuring the continuous availability of electricity for nearly 43 million end-users across the Netherlands and Germany.

Short term: impact and focus on security of supply
The Ukraine war - a humanitarian, geopolitical and security crisis - has had a notable impact on TenneT’s activities. In the European ENTSO-E context TenneT has collaborated to synchronize the Ukrainian and Moldovan grids with the European grid to support electricity supply in those countries. The Ukraine war has also exacerbated rises in energy prices, as well as a strong awareness of the importance of security of supply. To this end, TenneT is seeing companies accelerating their electricity demand and governments becoming more proactive and ambitious in bringing about the energy transition. Both the Ukraine war and the COVID-19 pandemic have had a major impact on the prices of the raw materials TenneT uses in its assets. This includes steel, aluminium and copper. High market price-levels of energy have also led to a significant increase in grid expenses. These are costs TenneT must incur to compensate for grid losses, to maintain the energy balance on the grid, and to pay for alternative routes for the electricity when grid sections are congested or unavailable due to grid expansions. Under regulatory rules, these higher grid expenses are budget neutral and will be reimbursed through future tariffs.

The electrification drive among companies and industries and the fast-growing demand for electricity - including renewables - led to capacity issues (congestion) on TenneT’s grids in certain regions. This became most evident in the Dutch provinces of Noord-Brabant and Limburg where a temporary stop is set for new connection requests pending a congestion analysis. TenneT, in close cooperation with all stakeholders - such as the Ministry of Economic Affairs & Climate and the designated coordinator - is working hard on congestion solutions for these provinces and more broadly. There are four elements to this approach, with different responsibilities and varying degrees of involvement for the stakeholders involved. These are: making smarter use of the grid, speeding up grid expansions, increasing predictability through a more programmatic approach, and improving communications.

Mid/Long term: preparing now for a carbon-free energy system
Firstly, the innovative 2GW program will enable the faster development of offshore wind energy through economies of scale and the standardisation of 15 up to 20 2GW offshore wind connection systems by around 2030. The 2GW standard represents a huge step forward after today’s 0.7GW AC and 0.9GW DC offshore-connection systems. It will save time, resources and money, while doubling connection capacity by using fewer cables and platforms. TenneT plans to enter into a cooperation agreement with key market partners for a period of up to eight years. The agreement covers offshore platforms and onshore stations, as well as the converters for the two-way conversion between alternating and direct currents. The impetus of the large-scale tender underlines the long-term purpose of building up all the required resources such as industry sites, staff, and materials.
Secondly, TenneT has taken the first steps toward what it calls the Target Grid 2045. In close coordination and dialogue with governments, ministries, and other stakeholders, TenneT aims to design and build the electricity grid of the future. This must ultimately be ready by 2045. With Target Grid, TenneT is committed to making a timely and active contribution to the forward-looking path taken by the Dutch and German governments towards an affordable and achievable highly electrified climate-neutral energy system.

Manon van Beek, CEO TenneT, says: “Just as collaboration across countries is key to working on the Target Grid, the same is true for achieving energy security this winter. We’re all giving this our full attention right now. The tendency to focus too closely on our national interests doesn’t produce the right solutions. To become independent from Russian gas, and from fossil fuels in general, I believe we must become more dependent - on each other that is. This applies to the EU member states, but also to politics and industry, citizens and customers, suppliers and producers, regulators and TSOs. The recent Esbjerg Offshore Wind Declaration – through the Netherlands, Germany, Denmark, and Belgium agreed to jointly develop the North Sea as the green power plant of Europe - is a striking example of the kind of collaboration we need.”
Arina Freitag, CFO TenneT, says: “As a true cross-border TSO, we can really make a big and positive impact on Europe’s transition to a green energy system, assuming green growth is smart and  responsible. This means, for example, that regulations and the granting of permits must keep pace with the implementation of our investments. Furthermore, I expect that our current investment programme will require additional funding with both debt and equity capital. Sharp price increases for materials and other resources are at the root of the increasing costs of our projects. This will also have an impact on grid tariffs for consumers and businesses.”

In the first half of 2022, we made significant progress on several projects, most significantly: